Rick Santorum Says Gay Community is On a Jihad Against Him 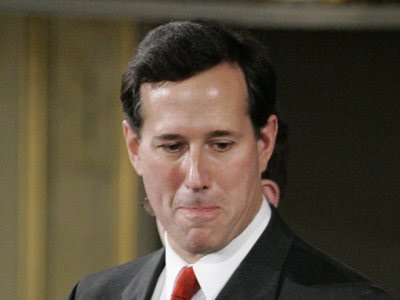 I didn't know it but one of my most hated Republicans was on the campaign trail in my city on Friday. Even though he didn't attract a big crowd, he was preaching heavily about how he hates gay people and wishes sodomy laws were still enforceable. In his own words he also said this.
"So the gay community said, 'He's comparing gay sex to incest and polygamy, how dare he do this,' and they have gone out on a, I would argue, jihad against Rick Santorum since then,"
I know he's also very Anti-Muslim too, but seriously a Jihad? Islam is harsher on homosexuality than Christianity is, well at least these days. I hate this racist homophobe who doesn't believe in democracy.
Posted by Adam at 12:39 PM

This dude is an idiot.

Retarded biggot that is kidding himself by running for President.

Definitely not the kind of leader America needs.