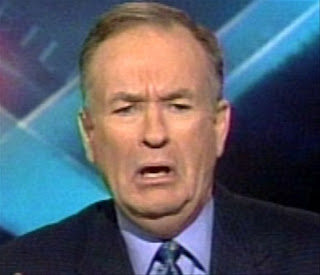 When Obama revealed a plan to slightly increase the amount of taxes on the super-rich Bill O'Reilly took some offense. How dare he tax him more money? Even though he pays far less percentage wise compared to the middle class. Here's Bill's own words

"Here's the unintended consequence of Mr. Obama's revenue enhancing plan, and I must tell you I want the feds to get more revenue. I don't want to starve them, as some people do. We need a robust military, a good transportation system and protections all over the place. But if you tax achievement, some of the achievers are going to pack it in.

Again, let's take me. My corporations employ scores of people. They depend on me to do what I do so they can make a nice salary. If Barack Obama begins taxing me more than 50 percent, which is very possible, I don't know how much longer I'm going to do this. I like my job, but there comes a point when taxation becomes oppressive. Is the country really entitled to half a person's income?"

Well Bill if you want to make no money because you pretend the government is going to take half your money go right ahead. I'll be happy to complain like a whiny baby for a couple hours and get payed millions a year. Obama could tax me 99% and I'd still be happy.
Posted by Adam at 2:44 PM

In Brazil, we pay the highest taxes in the world and without return.

He's such a whiner.