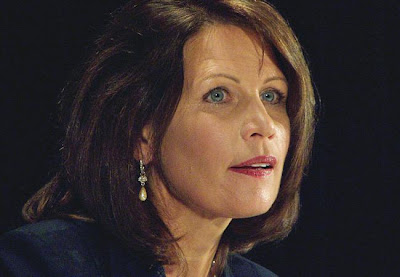 The congresswoman usually says stupid things, but this is just plain dumb.
"I think you earned every dollar, you should get to keep every dollar that you earn. That's your money, that's not the government's money. That's the whole point. Barack Obama seems to think that when we earn money it belongs to him, and we're lucky just to keep a little bit of it. I don't think that at all. I think when people make money it's their money."


Look Michele, you live in a country with a government. You don't manually pay for every service the government hands out. Every government since the age of time have had taxes. Your job is tax-payer funded, and it's not like your husband's clinic or family's farm hasn't denied government handouts either. I know the Democrats moved more right over the years, but the Republicans like here got a one way ticket to the insane asylum.
Posted by Adam at 2:08 PM