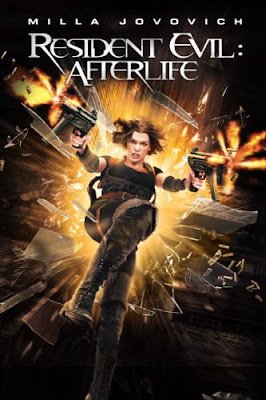 The Resident Evil films can be rather hit and miss. I hated the first one, the 2nd one was good, the 3rd one was alright, but I waited to see the 4th one.

Like most of the films (except the 2nd one) this isn't really based on any particular game in the Resident Evil series. Sure they throw some characters in there, but they're almost nothing like their video game counterparts. The film starts out in a zombie-infested Tokyo with a bunch of Alice clones tearing up the place, then we see the real Alice lose her "powers", and her quest to find a place to survive.

The lack of purpose makes the film's plot sink even worse. It has some cool scenes like the shower fight with the axe-wielding  big zombie giant , but most of the film is just plain boring. 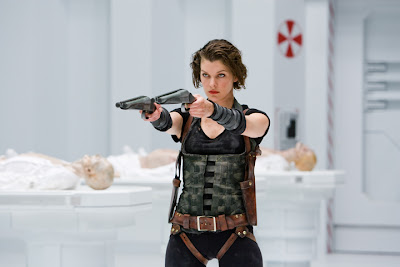 I really like Milla Jovovich, but this is one of the worst films she's ever acted in. They really need to put an end to the Resident Evil film series. It was a decent idea at first, but they're milking the cow far too long.
Posted by Adam at 2:46 PM

I thought the first one was like meh/alright. After that it got dumber every time..

Believe it or not, I haven't seen any of the films. I loved the first games, and just couldn't let the movies tarnish that.

The only reason why people watch this shit is because it is titled "Resident Evil". Otherwise, I don't think It would have sold good.