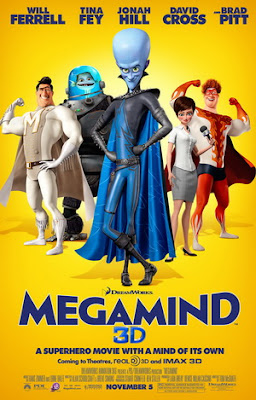 I don't know why but I let Megamind slip passed my radar. I didn't even know the movie existed until I saw the DVD running at a TV demo station. I saw a copy at my local library the other day, so I went to check it out. 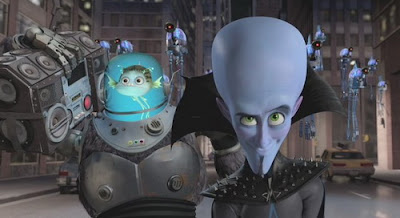 The movie is about an alien dude raised on Earth named Megamind. His intentions were good at first, but after realizing the only thing he does well is being bad he decides to be evil. So he starts a life of cartoonish super-villainy.

He eventually is stopped by this guy during every single attempt and then put in jail. But after one final attempt, the super-hero is seemingly killed and Megamind has taken control of the city that hates him. 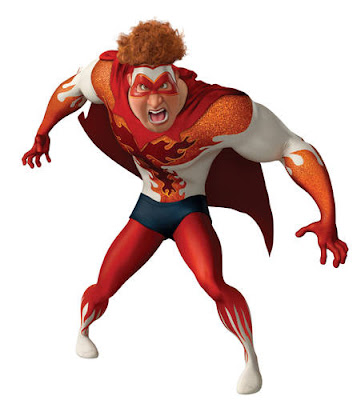 So he finds life rather boring when no nemesis so he decides to make one. After seeing his "creation" backfire against him, he eventually takes the path of the good side. I didn't really like Titan very much, he's just too dorky. 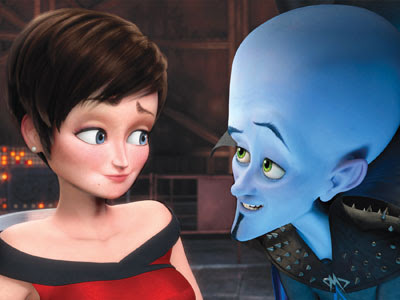 Besides that, I had no complaints about the movie. It looks stunning with great voice work, tons of action, and plenty of humor. One of the best animated films I've seen in quite some time.
Posted by Adam at 7:51 PM

it was a fun flick...my kids are into superheroes right now so they thoroughly enjoyed it...

Thanks for the recommendation! I'll check it out~

PS...I'm not much for drinking egg nog, but it was really tasty in the scones.

This movie was actually fairly decent for something by Dreamworks. I enjoyed it on the plane.

AND I love Tina Fey! I know, I've never seen this one either, but I've heard it's fantastic. Thanks for the reminder! I need to scoot over and grab it~ <3