Fact of the Day: Benedict Spartan 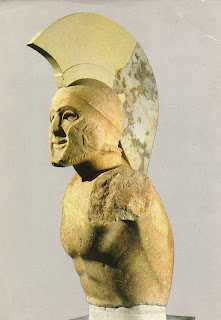 Despite being a great general, the Spartan Pausanias decided to betray both Sparta and Greece to Persia. However some Greeks found out, and decided to formally arrest him. He caught wind of their plan, and hid out in a holy temple. Since it was sacred land, they couldn't touch him. They instead walled up the area, and let him starve to death.
Posted by Adam at 12:22 AM

Email ThisBlogThis!Share to TwitterShare to FacebookShare to Pinterest
Labels: fact of the day, greece, iran, Pausanias

nice way to get around the problem ^^

I didn't know this story, thank you for sharing with us. All we know Spartans have this kind of mind...

Adam about your question the only difference between a greek yogurt and a normal plain yogurt is the consistency, greek yogurt is more creamy but you can use perfectly regular yogurt!

haha what an interesting story i didn't know that :p
following