While it's possible to beat and earn an perfect score on all 255 levels of Pac-Man, once a player reaches level 256 the game is over. Pac-Man was originally designed to be played until the gamer lost all their lives. However due to a computer error, once a player reaches level 256 half of the screen is a garbled mess. Most say beating this level is impossible, and you'd be famous if you actually completed it. I'm honestly not very good at Pac-Man so I think this is one challenge I can leave alone. 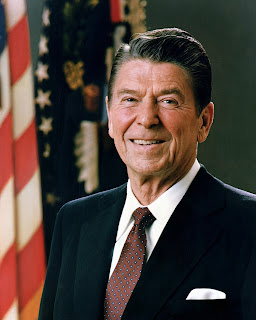 Funnily enough, there have been some false claims of people trying to get pass this level. In 1981 President Ronald Reagan wrote a letter to an 8 year-old boy named Jeffrey R. Yee congratulating him on his score of 6,131,940 points which is only possible if one passes this level. The proven "perfect score" is 3,333,360 points which takes at least six hours to perform if one is skilled enough. Some have claimed to have passed the level in modern times, yet nobody has achieved this feat. To think a kid could almost double the highest proven record only 1 year after the game was released is a little far-fetched don't you think?
Posted by Adam at 8:27 AM

Thank you for your comment on my blog ^^ You have a great blog :)

you should watch King of Kongs:fistful of quaters that Billy Mitchell chap has the pacman perfect score record i think

Kids exagerate all the time! So its not far fetched at all!

(I feel lame I couldn't get past the third level...)

http://youtu.be/0DScoj1PJQ0 watch it. trust me.

Now that I didn't know about.