A Look Into Video Games: Charizard 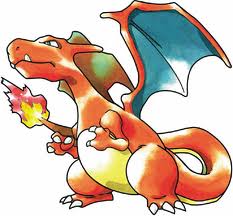 Charizard is the final evolution of Charmander in the Pokemon series. Since appearing on the cover of Pokemon Red version, he's been pretty popular with fans ever since. I like him because my Blastoise could easily take him down. 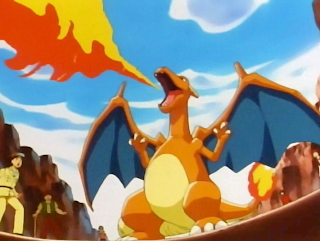 I also remember Charizard in the Pokemon anime. He was super strong in it. 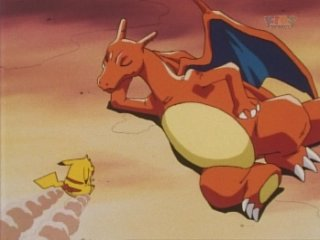 Except he never obeyed any commands by Ash until much later on. Bummer.

I recently had to fight him in Pokemon: Heartgold, and Red's Charizard had some power. Even my strongest water pokemon had to struggle to finish him off. 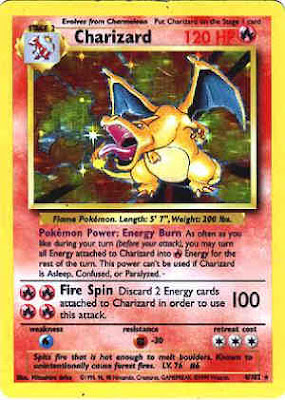 And of course his original Pokemon card. This one piece of cardboard was worth about $150 back in the day easy. If you had one, you were admired by all those who played it. Consider yourself lucky if you managed to get one. 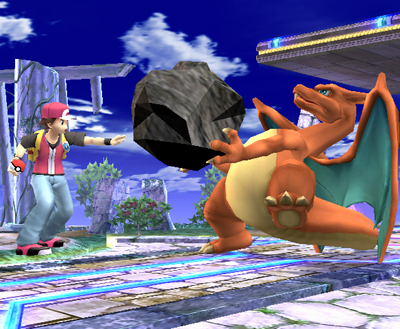 I didn't like him too much in Super Smash Bros. Brawl. I mainly stuck with Squirtle. 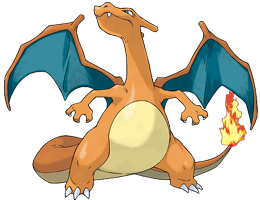 His Japanese name is リザードン (Rizadon) which is based off the English word "lizard".
Posted by Adam at 11:47 AM

If you had that Charizard card... you were the king. Nostalgia.

And I've tagged you! link

I loved this guy, he was the reason I got Pokémon Red over Blue. (Since it had Charizard on the cover)

Also, one of my friends and I had this running gag where we would scream "HOLY SHIT, CHARIZARD!" whenever he appeared in Brawl.

Heall yeah, Charizard! He's the best starter evolution ever. I remember my little sister finishing the game and defeating the Elite Four with just a high level Charizard and a bunch of low-level cannon fodders. She just keeps on healing and reviving the guy until the enemy is defeated.