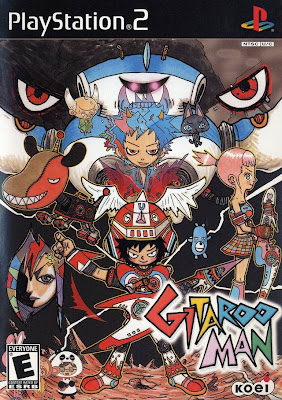 While I'm not much of a musician I do love jamming out. However I'm not like those high-scoring kids who can perform every note without a doubt. So why pick Gitaroo Man you say? Well I just wanted to give it a play. Why the rhymes in my review? Well a little inspiration from one fellow blogger with rhyming skills as fierce as kung-fu. 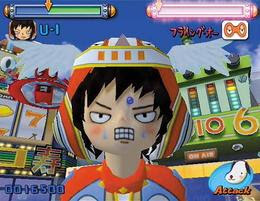 Now Gitaroo Man isn't exactly the typical musical game. If you're used to a guitar controller or a dance-mat you might find the control method a bit lame. However even though you're limited to a regular PS2 controller, it's not so bad. Though there's parts about the control that's disappointed me more than just a tad. 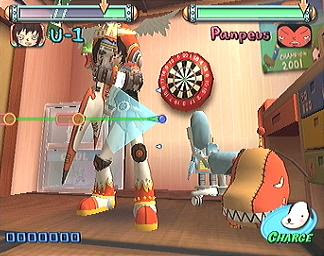 While you're guitar-less, the hero is equipped with a mighty fine axe. Though if you can't handle the pace, you might have to face the facts. Holding the control stick and doing button-presses is far harder than it seems. I would have made quite of a few changes if I was on one of their development teams. 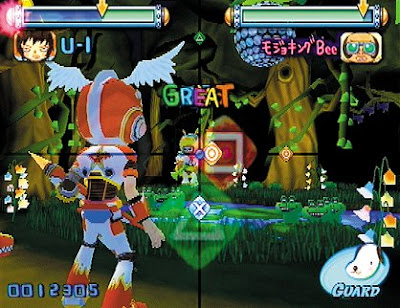 Despite my beefs, the music is rocking and the bosses are epic. Though my attempts to beat the digital rock-legends were pretty pathetic. It's sad that no matter how much I played I didn't get very far. But for those who can handle the beat, this is one game that raised the bar. If you consider yourself weak at music games then this title might be a bore. But if you know you can handle a real rock challenge then add two points to my score.
Score: 7 Out of 10
Posted by Adam at 6:14 PM

Never played it before, but it looks pretty fun.

it actually sounds quite fun :p