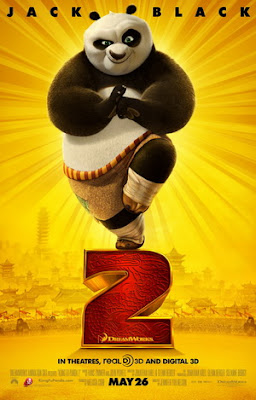 I saw the original film not too long ago, and thought it was a decent movie. I remember seeing Kung Fu Panda 2 on a display TV at the store a few weeks ago and decided to go ahead and rent it. 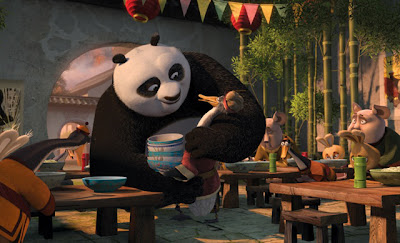 The movie is set shortly after the first. Po is now the well respected dragon warrior and is a pretty big star in his town. Things are going pretty good until they find out about Lord Shen's plots. He's an evil peacock who might not be the greatest Kung Fu warrior but has an army of wolves and plenty of cannons to make up for it.

The story also goes back to Po's past. Mainly discussing how this baby panda got adopted by a goose. Pretty sad tale, but there is a twist later on. 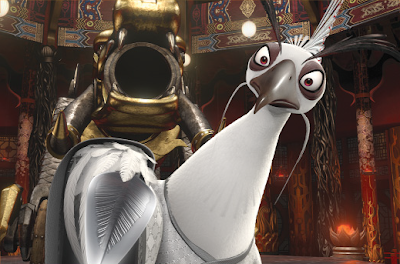 The Kung Fu vs modern weaponry concept was interesting, but I think it lost a lot of the charm from the first movie. I preferred the action in the original a lot more. 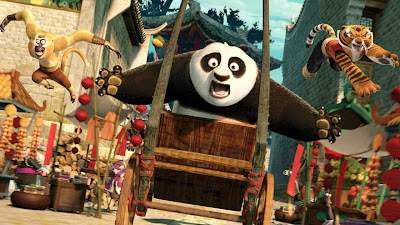 Ditto for the jokes and humor in the film as well. They just seem like they're a bit watered-down in quality. But it's a still a decent film with wonderful visuals. Great for kids, but everyone else depends on the viewer's tastes.
Posted by Adam at 4:01 PM

Glad you enjoyed it! It looks like a fun kid's show, but something that wouldn't drive adults too crazy. :)

I saw this one It's not too bad

Yeah, I'll probably skip this one! Thanks for your review~

i think i saw like 5 minutes of it at my brother's house. i've gotta say the art in the opening credits was super inspiring. i liked it better than what of the plot i saw.

I've only seen the 1st movie. I've been planning to watch this for a long time now but I feel lazy going to the video store.