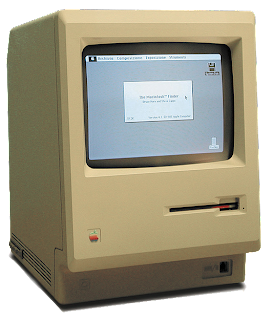 While the Macintosh wasn't the first computer churned out by Apple, it did become it's most popular PC model. Jef Raskin came up with the idea of a low-cost and easy-to-use computer and wanted it to be named after his favorite type of apple which was the McIntosh. It's a very soft and sweet apple which is very popular in Eastern Canada and New England. It's available most of the year in most American grocery stores.

Email ThisBlogThis!Share to TwitterShare to FacebookShare to Pinterest
Labels: apple, fact of the day, produce

That Mac pic brings back some memories..! LOL!!

Apples are good for you! Take care
x