A Look Into Video Games: Arcanine 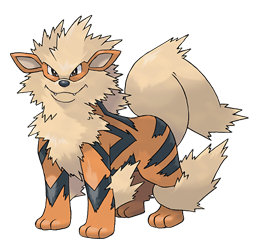 Arcanine is a pokemon from the original 150 set. Even though you need a firestone to get him, his new look is pretty cool. I never used him too much in the games, but I did buy a Japanese booster pack of the trading card game. The reason I remember this is because it had an attack power of like 100. Some kid took notice and basically bullied me into trading him for it. So sad, young adults taking advantage of those younger than themselves over a children's card game.

His original Japanese name is ウインディ (Uindi) which may refer to it being fast like the wind.

Haha, I had pretty much the same experience with a Rhydon. I think that also had 100 hp or something.

Arcanine is my favourite!!

Arcanine is awesome! I went through almost the entire of FireRed with this sucker :)

and I had the same card-theft experience as a kid too :( RIP Charmeleon.