A Look Into History: Theodore Sedgwick 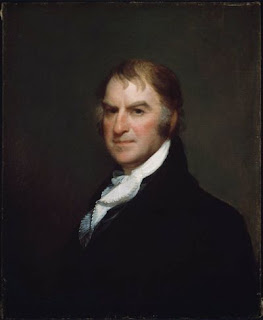 Theodore Sedgwick was an American politician serving as a Federalist. After studying law, Sedgwick joined the Revolutionary War serving most notably in the failed American invasion of Canada. After the war he went back to law, and represented a pair of African-Americans in a legal bid for their freedom against their master. The Massachusetts Supreme Court ruled in favor of Sedgwick's clients, and the case eventually led to slavery's abolishment in the state. He later got into politics serving in the Supreme Court and both sides of Congress. He became the 5th Speaker of the House in 1799 for one term, and lived the rest of his life as a justice of the Massachusetts Supreme Court.
Posted by Adam at 10:47 PM

Email ThisBlogThis!Share to TwitterShare to FacebookShare to Pinterest
Labels: A Look Into History, Massachusetts, politics

Sounds like a pretty good guy. How come I didn't know about America trying to invade Canada?? What the heck...

because we failed miserably at it.