A Look Into Video Games: Scyther 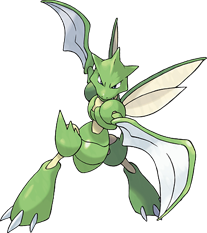 Scyther is a pokemon from the original 150. I never had him much on my team, but he was pretty cool in design. Both in the game and in the anime. 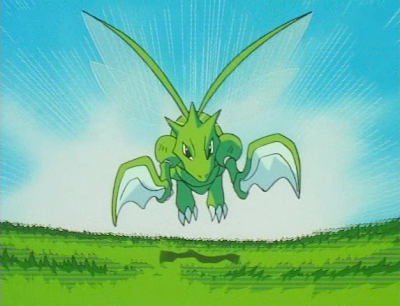 His original Japanese name is ストライク (Sutoraiku) which is based on the English word "strike" which probably references it's blade-arms, which wouldn't be so fun to be on the receiving end of a strike from them.
Posted by Adam at 9:32 PM

This is one of the coolest-looking Pokemon during the first game. It's just kinda disappointing that this Pokemon wasn't very useful.

Syther was one of my favorites from the original games. he was the 1 bug / grass pokemon i liked using (i always considered my self a Fire type user with a slight mix of dragon). He got really useful in Pokemon Silver, when facing Dark and Psychic types. His speed and Attack power were off the charts.