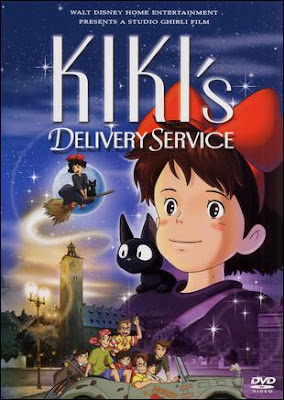 As of late I've been watching a lot of movies by Japanese director Hayao Miyazaki. While the last films I've seen like Princess Mononoke and Howl's Moving Castle are fairly grim, Kiki's Delivery Service is much more light-hearted. Practically no violence, and not even a real antagonist. Might sound a little lame, but if you liked Ponyo then you'll like this film. 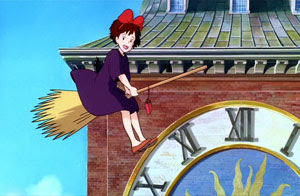 The film is about a young girl named Kiki, who just happens to be born a witch. Apparently all witches have to grow up and find a new town to settle in. So Kiki goes a tad early (against her parent's best wishes), and settles in a very Stockholm-like city. 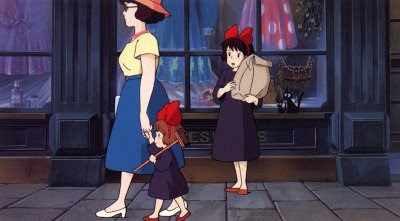 Even though Kiki can use magic, it's nothing close to Harry Potter. The only magicial things Kiki performs is riding on a broom, and talking to her cat Jiji. However she uses her broom-riding abilities as a way to start a delivery service which takes off quite well. The movie's main theme is about friendship and growing-up, rather than mystical powers. 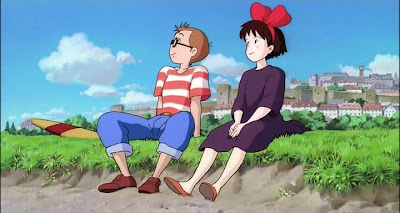 I would say this is probably my least favorite of Hayao Miyazaki's films so far (haven't seen them all) though I still enjoyed the movie a lot. It's charming and has a pleasant tale that almost anyone can enjoy. Disney produced the dub, so the English voice-actors are top quality (including the late Phil Hartman), but you can also watch the movie in it's original Japanese form. A great movie for kids, and a safe choice for a Miyazaki fan.
Posted by Adam at 12:20 AM

Haha, this is my girlfriend's favorite anime movie of all time. Probably my third favorite Miyazaki film, just behind Howl's Castle and Arrietty.

I liked it. My mom worried about me when I was younger because it's more for girls, lol.

great review, adam. i love these kinds of animations.
i always appreciate your visits, so thank you. how do i subscribe to your blog? can't find the follow button.
have a great day!
xoxo
jasmine
AdamAlexMommy

I LOVE that film!! It's been one of my favs since I was little. I love all his films, even though I don't watch much anime in general. They're always very fairytale-ish. Did you ever read the book for Howl's Moving Castle? Miyazaki drifted kind of far from the original story, but it's a really great book.