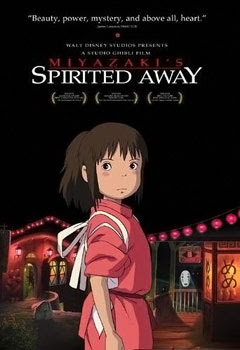 While I've seen most of the Studio Ghibli films directed by Hayao Miyazaki, I oddly didn't choose Spirited Away until now. Even though it's one of the most popular among fans and it also won an Academy Award for Best Animated Feature. Luckily with all of it's related films, Disney has produced the most recent dubs of the movies. So if you don't dig films in Japanese audio, they have provided an A+ voice acting cast in English. 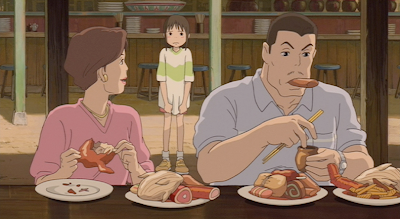 The movie is about a typical Japanese family who moves to a new city. However the (not so smart) father takes a "shortcut" and winds up in a creepy forest with an eerie tunnel in front of them. The curious father decides that it's in the family's best interest to infiltrate the tunnel to find out what's on the other side.  When the trio exits said tunnel, they find what appears to be an abandoned theme park from the early 90's with a strange buffet being cooked with no staff. Mom and Dad decided to dig in, and their daughter Chihiro decides to look around. 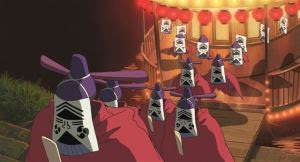 Except when the sun goes down, the "park" turns into a mystical area filled with supernatural creatures. A frightened Chihiro runs off to find her parents transformed into pigs. However a friendly spirit named Haku befriends Chihiro and protects her from the generally human-phobic opinion of the world she accidentally stumbled into. Chihiro is forced to work for an evil witch, and desperately tries to find a way to save her parents and escape back into the real world. 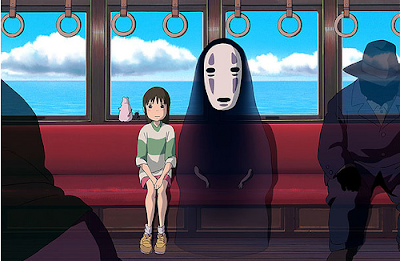 Most Miyazaki films have their own theme that makes them stand apart from their sister films of unrelated plots, and I just loved seeing a modern Japanese girl interact with the ancient beings of Japanese folklore. There was always something at the next corner to amaze me, and I don't think anyone could expect what to see next. The film is as magical as the folklore it's based on, and I would say that it probably is my favorite Miyazaki film so far.
Posted by Adam at 8:19 PM

I've never seen any films like this, but thanks for your review!

Yeah Spirited Away was good from what I can recall, been a while since I watched it at my hall.

We have this at the library!!! But I've never watched it.

Thanks for clearing up the Toadstool/Peach confusion :)

Sounds like annother ponya, I will give it a watch.

This seems like it would be a very different kind of movie from the average movie! I think I'll have to watch this some time!

I keep hearing this movie is extremely sad, haven't gotten around to watching it yet though.

I've always wanted to watch this... thanks for reminding me with this post!