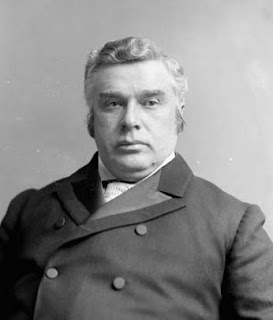 John Sparrow David Thompson was the 4th Prime Minister of Canada, and one of the country's first leaders. He briefly held the role of premier for Nova Scotia. He later became the Minister of Justice, and introduced the first legitimate criminal code for Canada. He became Prime Minister after the death of John Abbott, and dealt with issues such as the possibility of annexation by the United States, and bringing Newfoundland into the Confederation.  He died suddenly of a heart attack while visiting Queen Victoria in England. He was the first Prime Minister to die outside of Canada, and the Queen gave him a rather impressive funeral.
Posted by Adam at 5:00 PM

Never knew any of that and some history with my province in it too.

interesting history behind this man and his influence in Canada!