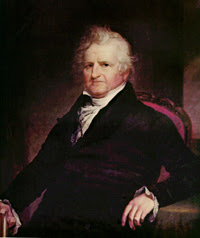 Joesph Bradley Varnum was a Democratic-Republican who served as America's 7th Speaker of the House, and later became a Senator. As a congressman Varnum attempted to pass legislation to prevent the progression of the Trans-Atlantic slave trade. After his time in Congress was over, he went back to his home state of Massachusetts and served as a state senator there until his own death.
Posted by Adam at 6:35 PM

Email ThisBlogThis!Share to TwitterShare to FacebookShare to Pinterest
Labels: A Look Into History, Massachusetts, politics

democratic-republican. Interesting. Speaker to Senator it is demotion or promotion?

Good to know that.

The demrepublicans were a party before they spilt in two. One instantly were dems but the gop took awhile to form

i'm guessing he was considered a yankee? slave trade of any kind is no bueno.