A Look Into History: Nathaniel Macon 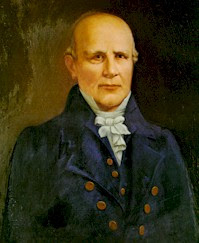 Nathaniel Macon was a Democratic-Republican who served as America's 6th Speaker of the House. Macon was opposed to the U.S. Constitution, and spent his whole career making the federal government weaker. He was opposed to the navy, Alexander Hamilton, the Federalist party, protective tariffs, among many others. He was one of Congress' first members who constantly voted "no" on almost every vote.
Posted by Adam at 8:30 PM

Email ThisBlogThis!Share to TwitterShare to FacebookShare to Pinterest
Labels: A Look Into History, Alexander Hamilton, politics

Well, I guess Aaron Burr took care of Alexander Hamilton for him.

Constantly vote no on almost every vote? Is this Ron Paul's like great grandfather?

hahaha, almost no on every vote?

probably Ron Paul is such a goober