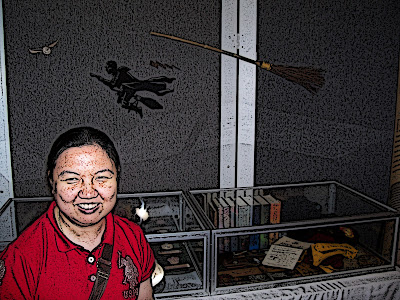 So the other day we find out our library is having a special Harry Potter week. Why Harry Potter week when the last movie came out last year? Beats me, but whatever. Daisy and I are huge fans so we checked it out. 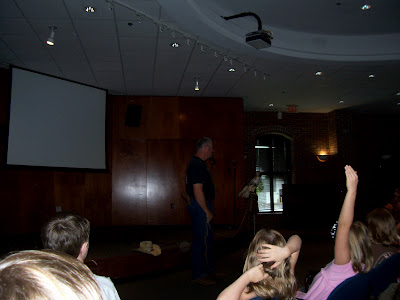 So the first event (the other 2 are movie showings on other days) was this guy who's hobby is training hawks, falcons, and other birds of prey. What does that have to do with Harry Potter? I have no idea, I guess the library staff was like "Owls (like Harry's pet Hedwig) hawks, same difference". Despite it being really not Harry Potter, it was rather interesting. He brought his own pet red-tailed hawk Trudy for showing. 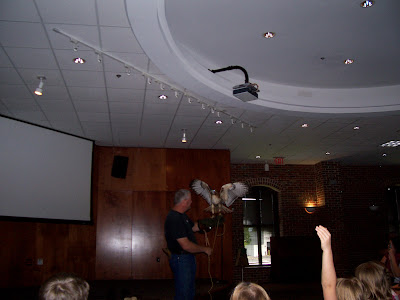 He had Trudy tied on a rope (so she didn't fly around) but she was pretty obedient. She did freak out when the kids up front were told they could leave at the end of the event and they all stomped on the floor on their way out. He did teach a lot about the hobby, and an interesting tale of how he managed to find Trudy in the first place. 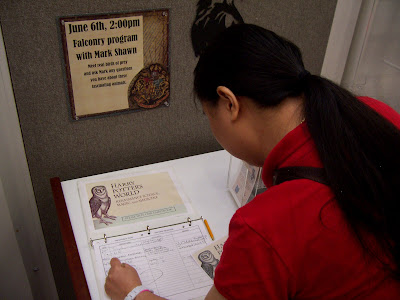 Daisy then wanted to check out the little Harry Potter display downstairs. She snagged a crossword puzzle (too easy by the way, and we found a typo) before she got to the sign in sheet. 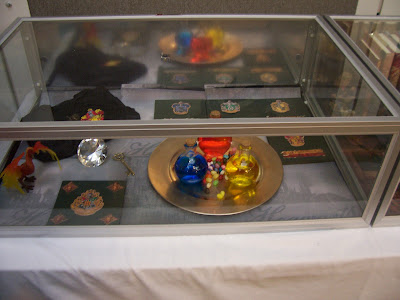 There wasn't much to see. Just some made-up potions,and emblems. 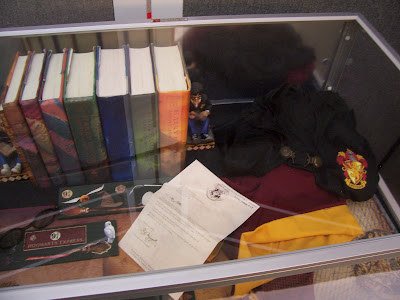 And some Harry Potter clothes and books. 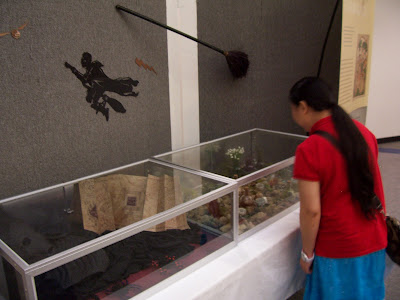 And a deatheater costume, and some herbology stuff. 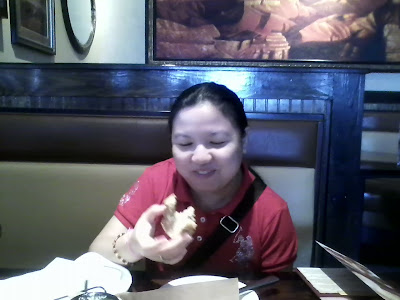 I then took Daisy to Longhorn Steakhouse. She literally has been begging me to go for months, and months. I'm a vegetarian, so a steak-house is not my first choice, but they serve stuff other than steak obviously. They have some pretty good honey-baked wheat bread as a free filler-er-up while you wait for your meal. 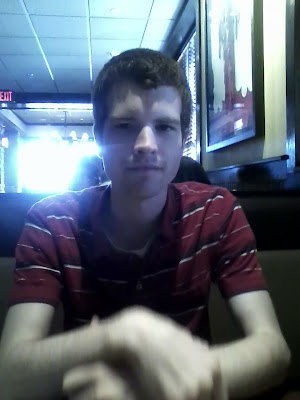 It wasn't a half bad place, and our waitress was better than some in other joints around here. Never seen Daisy so thrilled to go to a restaurant though. It's a good place, but I doubt it qualifies as five-stars on that rating system they always talk about.
Posted by Adam at 4:30 PM

Wow, your post actually appeared in my feeder! This is awesome, it will make life so much easier to stop by.

Having a hawk sounds fun. Pretty sure no one would mess with you then...=P

ha-ha! steakhouse for a vegetarian. i've seen bird shows like that before. i'm fascinated by watching the way animals are trained. your blog is finally appearing in my feeder now, too. :)

This is a magical place for all Harry Potter fans. Hawk, Owl - yeah, what's up with that?

Steakhouse? Yeah, I heard once from a brahmin(Indian vegetarian) that one client took her to Astrix kinda steakhouse and she had to cry inside literally.

I love your picture and Daisy's both look cute.

yes I fixed that issue, very complicated but I'm glad it works

I wish he had more than one bird though, oh and Trudy had an accident during the show. Let's just say the treats he fed her had time to digest.

and it doesn't affect me that much to be in a steakhouse. I don't spread my personal views upon others, and I rarely show emotion at any meat place. I actually worked a little bit in the meat department at my store. I do love irony so it wasn't that bad.

I'm a big fan of Harry Potter! That's cool you got to see all that stuff.

I hope you found enough to eat there! We love steak though!

She found a typo? Girl's are really good at that...too good sometimes. Sounds like a fun event.

Loved your reply. Sometimes the killer and "you are a murderer" kinda looks I get from vegetarians and "holier than thou" attitute shoved in my face- sometimes kinda - not good.

But that is what we love about you Adam, you are non-judegemental, nice, and honest and open and pretty cool and sweet - altleast the blog Adam we know :)

Ooh, I am a huge fan of honey wheat bread. At least the sides at steakhouses are pretty good?