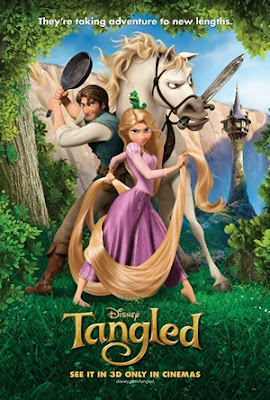 I remember hearing rumblings about Tangled when it came out in 2010. The movie is based on the classic fairy tale Rapunzel, and back in 2010 I wasn't exactly rushing out to go see it. But my mom bought herself the Blu-Ray version, and begged me to watch the extra DVD packed in. 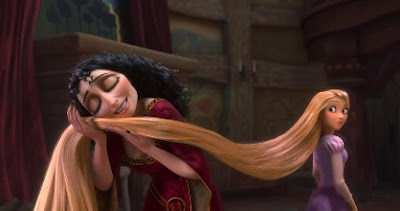 I honestly don't remember much about the versions of Rapunzel I've heard as a child. I just remember some girl in a tower with very long blonde hair. Disney adds a little originality to the story by making Rapunzel a princess at birth (in the original stories she becomes a princess by marriage) who had been kidnapped by an old woman who uses her magical hair to restore her youth. Rapunzel was too young to remember her real birth parents, but while she cares for her step-mother she longs to explore the outside world. 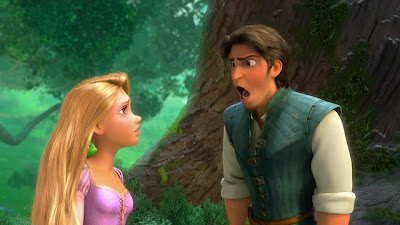 She then meets a young bandit named Flynn Rider after he climbs into the tower after being chased. Rapunzel confiscates his bag which holds a valuable tiara which ironically belonged to Rapunzel herself and uses it to barter with him to take her to see a lantern display that happens on every one of her birthdays. 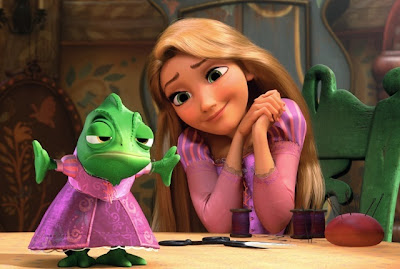 While I wasn't as wowed by the movie as my mom, I did enjoy it. The animation is absolute beautiful, and it features wonderful singing scenes.  I thought Rapunzel and Flynn had decent chemistry, and the horse Maximus was pretty humorous. Will Tangled become a classic Disney movie like Snow White or Cinderella? Only time will tell, but it's a family-friendly film I think almost anyone can enjoy.
Posted by Adam at 6:00 AM

It sounds like a sweet movie. I want to see Snow White and the Huntsman, I heard Snow White has fighting scenes!

it was such a lovely film! One of the best animated films in recent years. The lizzard was the best

Did the original Rapunzel story have a comedy lizard?

i havent seen this film yet but it looks pretty good

i watched this three times since i downloaded it ^_^ i love it!

My parents/friends/girlfriends always ask me to watch movies I wouldn't normally watch. Sometime's I end up liking them but most of the time I get tired of watching them. Sounds like your mom picked out a good one this time.

I would take Dumbo over a princess movie any day!

Tangled was pretty good. I didn't think I would like it as much as I did.

Hey man thanks for following! I returned the favor;) Blog looks cool man, I look forward to following it!

did they talk about how rapunzel's mom was craving cabbage, & her dad stole it from the witch's garden, & got busted? that's why she had to live with the witch. kind of like how when beauty's dad stole the rose, & the beast busted him. then the beast said you took my flower, i get your daughter. yeah cabbage & flowers don't really seem like equal exchanges for human lives. what does that say about fairy tale values of females? i'm such a fairy tale junkie, but i prefer them in written form. i'm not much into animation.

I had a mega crush on Flynn Rider when I watched it in the cineplex. :D

123movie - I had read the reviews about this movie and so took my 8 year old daughter to see it this evening. Just left the movie theater about 45 minutes ago. Here I am writing my first ever review. I just had to let everyone know how great this movie is. The 3D affects were great. Don't want to spoil it for you but this movie is wonderful in every respect. It kept my undivided attention from start to finish. It made me laugh like I haven't laughed in a long time. This movie is funny, sad, exciting, interesting and many other things I can't describe. I would recommend it to any one. I am 59 years old and really enjoyed it. You won't regret it.
See more:
watch the end of the f *** ing world 123movies
all the money in the world movies123
watch swiss army man online free
swiss army man putlocker