Fact of the Day: Better than Country Squares 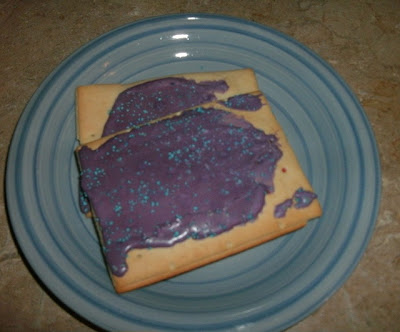 While Pop-Tarts are one of the most popular breakfast foods in America, it wasn't an original idea. In 1963 Post introduced a brand of pastries to compliment their cold cereals called "Country Squares". Post revealed it too early and Kellogg came up with Pop-Tarts to counter it just six months later. Kellogg stole it's thunder, and almost instantly couldn't keep up the demand.
Posted by Adam at 5:48 PM

I'm not a big fan of poptarts, but my kids sure are. I didn't realize they've been around so long.

Never knew that, oh what a name can do.

I just hear the name POP TART and I have a happy reaction. They were my emergency food of choice when I was teaching.

Ohh, I loovveee the chocolate fudge or smores pop tarts. Chocolate for breakfast. Yes, please!! How sneaky of Kellogs though ;0)

so i take it you know about the cereal wars between post & kellogg from back in the day. didn't cereal start out as health food? then during WWII, when the women were in workforce, while men were fighting the war, they came out with the sugared cereal?

It isnt tempting me to eat, that is for sure.