Fact of the Day: The Martians Have Invaded! 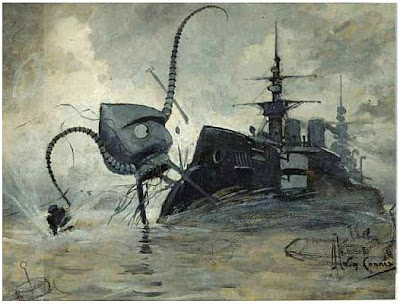 In 1938, Orson Welles read a radio drama based on the 1898 novel The War of the Worlds by H.G. Wells. The main theme of the novel (as well as the radio drama) was of an alien invasion by Martians. With people in panic over World War II, some listened to the drama during the middle of it and thought it was actual news broadcast. There was mass panic in the United States and Canada, until everyone was told the full-story.
Posted by Adam at 8:22 AM

Email ThisBlogThis!Share to TwitterShare to FacebookShare to Pinterest
Labels: fact of the day, HG Wells, Orson Welles, The War of the Worlds

Orson Welles had the loveliest voice.

I always loved hearing this story, just because it's funny to see how gullible people were. Yet, I bet if we could get something like this on broadcast TV, we could still get people to fall for this.

I think I vaguely remember hearing this somewhere. I can imagine how panicked they all would be! People are so gullible!

It must have been pretty convincing for people to believe it was true.

Haha, people must have been so gullible back in the day. I'd love to listen to this radio drama though. Do you know where it can be found?

Unless you believe the old war of the worlds tv show and then it was real and they made it a hoax so people would never know.