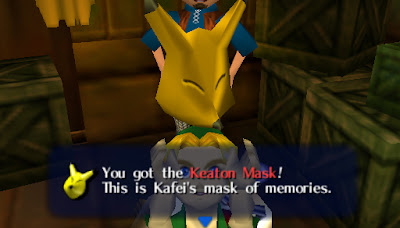 The Keaton Mask is a special item in The Legend of Zelda series. It had a very minor appearence in Ocarina of Time, but had a rather famous role in Majora's Mask.

In Ocarina of Time, it's only used in a side-quest for the Happy Mask salesman. You have to deliver it to some guard. I think I remember him saying he was buying it for his son. Yet he will wear it and keep it on forever. 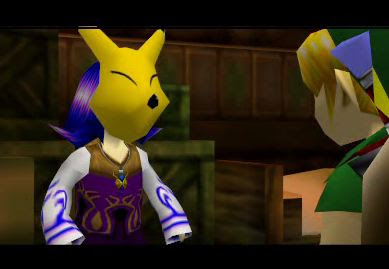 In Majora's Mask, it's worn by Kafei, the mysterious missing son of the mayor. His whole side-quest is probably the toughest in the game, but pretty rewarding at the end.
Posted by Adam at 2:56 PM

I always thought it belonged in a pokemon game haha

Nice one but haven't come across it yet!