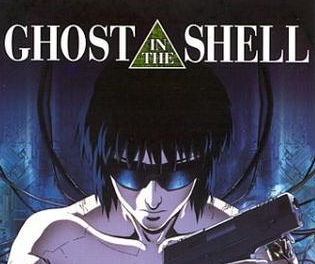 Despite my love for Japanese things, I've actually missed out on a lot of anime. Before the digital age of media, my only access to it was Toonami's selection of anime. While it was a rather noble sub-network, there was many great anime shows and films that never made the line-up. I've heard of Ghost in the Shell for quite a number of years, but I finally got an opportunity to view it now. 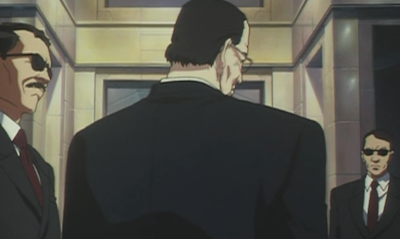 The film is set in the near-future where there are no silly things like flying cars and 10 second pizzas, but a slightly dystopian society with plausible scientific advancements.  Sure cyborgs and invisible camouflage aren't exactly in reach in our lifetimes, but let's be optimistic.  Well anyways, a criminal known as The Puppet Master has been terrorizing government agencies by controlling computer-enhanced humans (like cyborgs) remotely to advance his agenda. 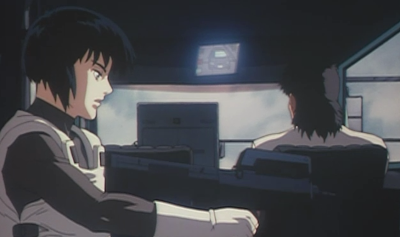 So Major Motoko Kusanagi (a true cyborg) is tasked to lead the effort to catch The Puppet Master. However in her effort to trap this one-of-a-kind guy, she finds great difficulty from The Puppet Master's own tricks, and deep dark secrets and corruption all around her. 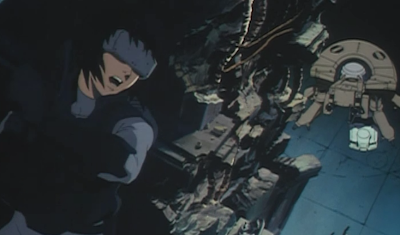 While the animation is a little dated, I was still pretty impressed by Ghost in the Shell. The plot is very original with a rather melancholic (and a little nonsensical) view on humanity's advancement in technology with very deep philosophical views on existence in general.  While the ending failed to satisfy me, I still really enjoyed watching it. I can see why it was one of the first anime films to make a decent splash in America.
Posted by Adam at 9:01 PM

Email ThisBlogThis!Share to TwitterShare to FacebookShare to Pinterest
Labels: anime, ghost in the shell, japan


If you have a minute, please check out my blog and follow me if you liked it. I'll appreciate it so much! Thanks!

Oh gosh, you only watched this now? Haha. I'm a 90's kid and this was one of my staples. And when the 2000s came along the animated series adaptation was pretty darn cool ahaha

I've followed by the way. Care to follow back? It may be a little daunting considering my blog may be a little girly, but you'll find I do a lot of alternative rock music posts and hero movie posts as well. LOL.