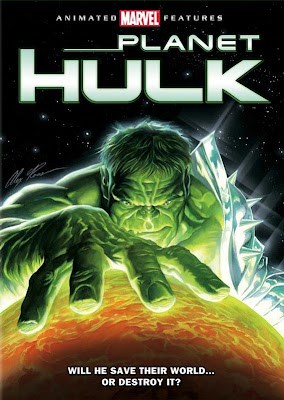 Watching The Avengers movie this year has peaked my interest in Marvel comics and characters. While many Marvel animated films and TV shows are simple retelling of old stories, Planet Hulk is based on the original comic book storyline of the same name. Which gives the film a great plot I wasn't expecting at first. After checking it out, I was hooked after the first ten minutes. 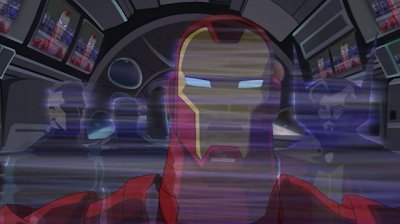 The movie starts out with Hulk captured on a space shuttle. He wakes up to be informed by Iron Man (the men behind him are also members of the Illuminati group of superheroes) that they believe he is too much of a danger to be left on Earth due to his uncontrollable rage. With regret, they attempt to exile Hulk to a peaceful planet with no danger to Hulk or his alter ego Bruce Banner, but with also no intelligent creatures or societies for Hulk to destroy by accident. In a fit of anger, Hulk smashes the ship and it crashes on a different planet than what Tony Stark had planned. 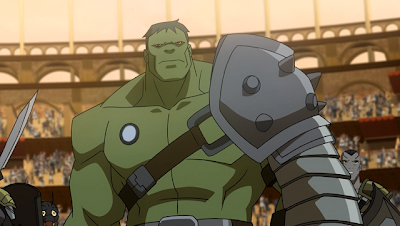 The Hulk encounters a world with technology a bit more advanced than Earth's, but with a government far behind Earth's liberty and democracy. Hulk is captured by royal troops, and forced to fight in battles akin to historical Roman gladiator matches. Hulk joins a resistance movement to free the people of the planet from their tyrant of a king. 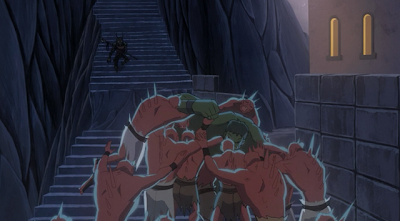 While Hulk has never been my favorite Marvel superhero, I was really impressed by Planet Hulk. While it may be animated, it's far more mature than most Marvel cartoon projects like their Saturday morning shows over the years. Fans of The Avengers-related movies will dig it, and so would those who enjoyed shows like Samurai Jack and the original Star Wars: The Clone Wars animated series from 2003.
Posted by Adam at 1:00 PM

i adore hulk since i watched Avengers because he was really hilarious there in many parts, nice facts =) xx

I've not seen this animated movie, but I've read the comic series of Planet Hulk, they are so goooooooood! But quite sad, poor Hulk goes through a lot of heartbreak. Hulk has always been my fav marvel character :D

Saw it but wasn't very memorable for me.