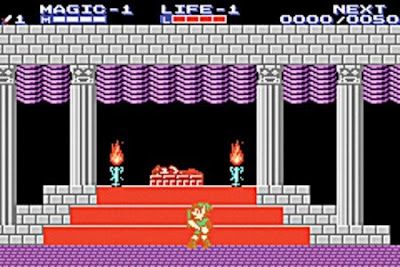 While Zelda II: Adventure of Link was a direct sequel to the original NES game, the plot featured a brand-new princess Zelda despite having the same hero named Link. According to the plot, a wizard put her into eternal slumber because she failed to speak of the secret location of her father's triforce piece. So to revive the ancient maiden from mystical nap-time, Link must go find that lost triforce piece. 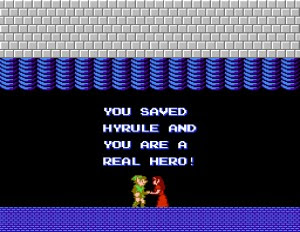 Since I could never stomach much of Zelda II, I never got to see the ending on my TV. But I'm guess I wasn't missing much. Have to give them credit for confusing fans with the 2nd game, most don't know about the different Princess Zeldas thing. Some players thought Link's name was Zelda for a long time.
Posted by Adam at 10:23 AM

Email ThisBlogThis!Share to TwitterShare to FacebookShare to Pinterest
Labels: A Look Into Video Games, NES, Nintendo, zelda, zelda II: the adventure of link

You made it sound like a good game but I'd rather just stick to call of duty. Thanks though. I'm following your blogs now, check mine out:DDD

I played this one!

I played the game once, but heard the princess's jugs weren't big enough to keep my interest.....

I remember playing that game and wondering how it could've been so different from the first zelda
that's probably the only bad zelda game I can think of actually, wind waker while not my cup of tea wasn't actually bad, and other than that all the others have been pretty good

I bought the game not to long ago for the Gameboy Advance. I wasn't too into the game. It felt odd. But I guess the best games have that one odd game (example Super Mario 2). I still like the art in this game. I do remember trying so hard to fight that Dark Link!