Fact of the Day: Ocean Friends 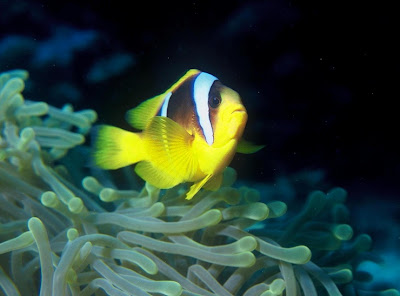 In the ocean, there's a flesh-eating animal species (which looks like a plant) called anemones which prey on many fish. However they make an exception for clown-fish. The clownfish eats it's leftovers, dead tentacles, circulate the water around them which aids them greatly. Anemones in return protect the clownfish from other fish with it's poisonous tentacles.
Posted by Adam at 7:00 AM

awww, that would be touching if the flesh eating animal wasn't so creepy

I guess they are kind of like the court jester, those clown are too entertaining to kill...haha

love coming to your site, so many insightful and educational tidbits :P

I think anemones look so cool!

nature at its finest. "it's the circle of life."