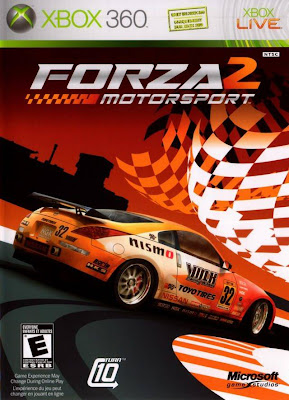 As a gamer I played my fair share of racing games. However when it came to a series like Gran Turismo, I never really cared for it. I came in optimistic but would soon lose my motivation to keep playing. In real life, I never would consider myself a car nut, and I always drive the speed limit. So driving sports cars in races isn't exactly my first idea of a good time either in real life or in a video game. But I got a decent deal for Forza Motorsport 2 (Microsoft's answer to Sony's Gran Turismo), and felt that if I couldn't get into it then I might as well give up the racing-simulation genre forever.

I have to hand it off to Microsoft, the Forza series takes its car racing very seriously. Real car models and brands are represented, and they all drive as close to their non-digital counterparts as you can get. It was a bit strange playing it for the first few races since I kept spinning out of control and getting last place finishes.

But despite that, Forza 2 is very newbie friendly. You have the option to follow a virtual line (which is color coded for speed) that will choose the best path for your car to take. After using this helpful tool, I was able to drive pretty well against my computer opponents. I also got very deep in the game's career mode which gives plenty of challenges and rewards.

But the problem I have with Forza 2 is that after a few hours I lost a lot of my desire to keep driving. While career mode is a monster-sized challenge, a lot of the races are on repeated tracks and they do start to feel stale. Plus the sense of speed is hard to feel which is quite rare for a racing game. I know the game is suppose to be a simulation of real life, but a race with sports cars feel as thrilling as a Sunday drive at times. While Forza 2 failed to keep me hooked, I'm now interested in trying the sequels.While the paint has faded, tires have worn, and the new car smell is gone; I did have a pretty fun time despite my complaints.

I like Gran Turismo. Well actually, i like games with car race so I think Forza would be cool to play. haha. nice review! =)

Have a nice day!~