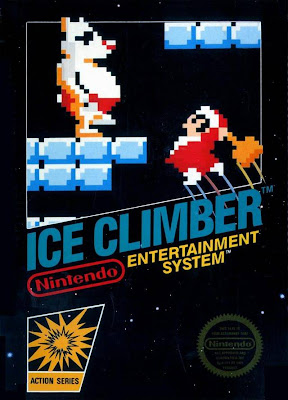 While playing Super Smash Bros. Melee, it was hard to ignore the Ice Climbers (Popo and Nana) who were playable characters that I never heard of. Then a few years later I unlocked their only adventure Ice Climber as an unlockable NES game in Animal Crossing on Gamecube. And I was extremely disappointed. 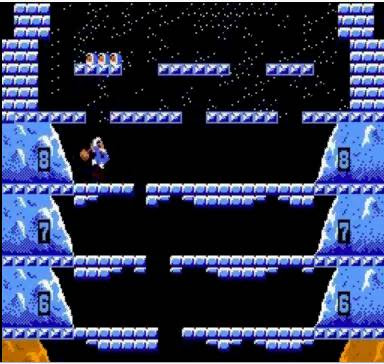 The game kind plays likes one of their stages in Melee, but more slow and stiff. I don't know if playing co-op would of been any better, but I just was playing alone as Popo. 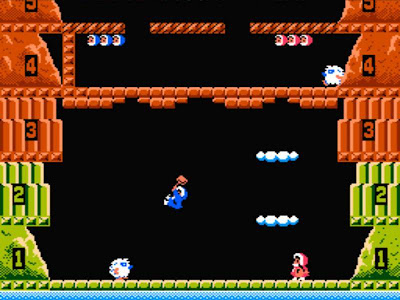 I guess there was a reason why most Melee players never heard of Ice Climber at first. This was obviously one of Nintendo's lackluster titles. I might give a sequel a shot if they decided to make one (I doubt it) but it's just aged far too badly.
Posted by Adam at 12:00 PM

Ha! Well, Adam, I can't fault you for hating this game, especially if you have absolutely no nostalgic feelings for it. After all, it *is* pretty darn stiff and frustrating. I used to hate it, too -- in fact, I'm pretty sure I wrote at least one, and maybe two, blog posts about that fact -- but over time I grew to like it (or maybe I should say appreciate it). You'll probably think I'm nuts for saying this, but I'm pretty sure the stuff controls were intentional, as if the main characters had been easier to control the game itself would have been too easy to beat. As such, you kind of have to accept the controls and try to work with them -- if you're at all interested in conquering the game, which I'm guessing you're not (and there's absolutely nothing wrong with that).

I feel old but what you said was true....

I heard of them before that, as they were in a 110 games thing I had I think.

yeah I remember your blogs about it. But my copy of Animal Crossing is gone, so concludes my copy of IC

It has not aged well, but I still have fond memories of playing it.