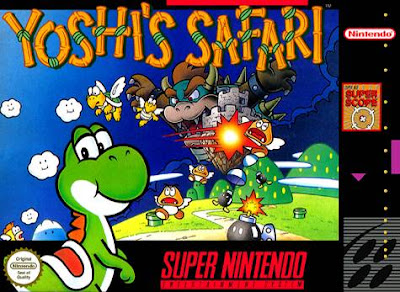 As a child, I really loved the character Yoshi when I played the Mario games. I'm suprised I never heard of Yoshi's Safari until the 128-bit era of video games. One of the reasons is that it uses the Super Scope light-gun accessory which failed to become popular. 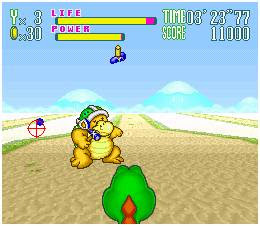 Since it used the Super Scope, it was a rail-shooter game. Mario and Yoshi teamed up to save some King, and to proceed through the game you must shoot enemies. You could even hit Yoshi, but with the loss of some energy and a mean look from your dino pal. 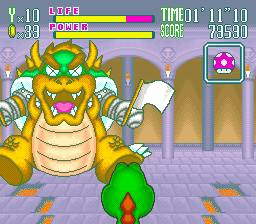 Despite its fate in the land of forgotten Nintendo games, it was the first game where Princess Toadstool was renamed Princess Peach. I really wish I would get a chance to play this, but to the nature of the Super Scope I doubt that's going to be possible anytime soon.
Posted by Adam at 9:09 PM

I've heard of this one but never played it. You'd think Super Scope and Light Gun NES games would be a perfect fit for the Wii's Virtual Console but I imagine Nintendo ran into some emulation issues.