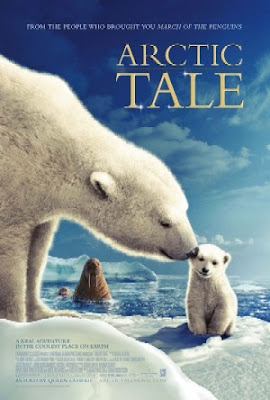 Yesterday Daisy and I needed a movie to watch together, and I saw this one lurking in the racks of the local library. I needed something a little different, and since polar bears are Daisy's favorite animal this seemed perfect. I think she was a little shocked to learn that this was a serious educational documentary than a family-friendly fictional film. 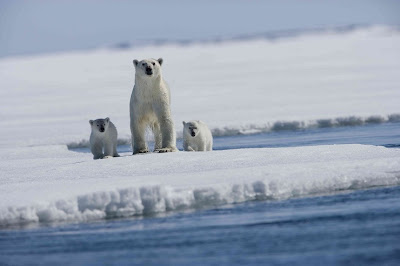 The film follows two split stories between a mother polar bear and her cubs, and a newborn Walrus and her herd. I don't particularly care for Walruses, but I enjoyed watching the early life of the polar bear cubs. This film is by National Geographic which also produced March of the Penguins, but sadly you won't hear this story narrated by the legendary Morgan Freeman. Instead we have to settle for Queen Latifah who was more suited for the role than I suspected as I have to admit. 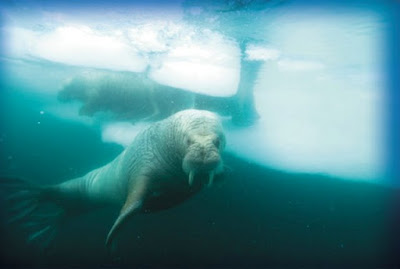 But despite the cute poster, this movie does not ignore or hide the harsh circumstances of nature. Tragedy does strike a major blow to both the Polar Bears and Walruses in rather heart-breaking moments.The movie's main focus is Global Warming's affects on the arctic, and the life-changing alterations because of it to the animals there. 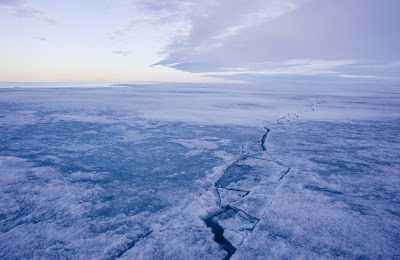 I did learn a little from watching Arctic Tale, and it really opened my eyes on the sad circumstances of the creatures up north. Since I've never seen March of the Penguins I can't compare the two, but it certainly doesn't match the Planet Earth TV series documentary. But I think everyone should give it a chance. It's not mind-blowing but it will make you think a little differently about the eco-system.
Posted by Adam at 5:00 PM

March of the Penguins was very interesting and yesterday with the melting polar cap, they showed a mama polar bear with a cub trying to fight a male for a scrap of food. She didn't get it.
It's funny. People watch and make movies but no one helped Mom get some food, letting nature handle it.
Maybe if she got a little strength, she could hunt better??
But then other areas become frozen like up north, as if the planet shifted a bit.No one talks about that either.

I've watched it, great documental, some parts are really sad though...

I want to watch this documentary!!

Interesting. I wonder if I'll see anything similar in my Conservation course.

It is a wonderful film, even with the documentary.

anyway wanna follow each other? just let me know :D

i want to watch it too... but i bet it's pretty sad, polar bears have a rough time because the sea is delaying to freeze more each year

such a delightful film!

it sounds like a significant film. all the endangered animals hurt my heart. did daisy like the movie? hail to the queen latifah! :)