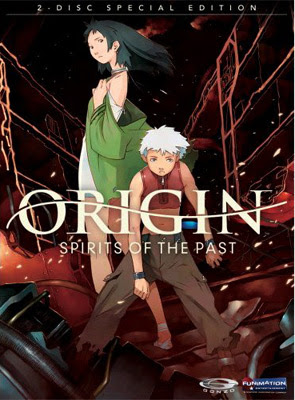 While browsing through the movies on Netflix Instant, I came across Origin: Spirits of the Past. As a fan of anime, I decided to give it a try even though I've never heard of it before. Guess it was one of those anime films that failed to make a splash in America. 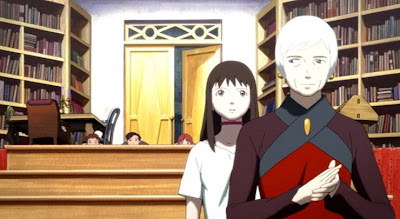 The film is set in a dystopian world where humans had once genetically altered plants to survive life on the moon. However their experiment is too successful, and the plants become sentient and super-powerful. Because of this the moon is shattered and the Earth's civilizations are almost all destroyed. Now hundreds of years later, the Earth is covered in a dense and super-natural forest with only a small number of remaining civilizations left. 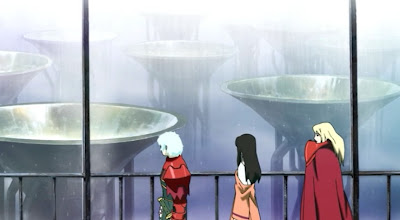 The story escalates when Neutral City resident Agito finds a mysterious girl named Toola locked in a time-preservation chamber. Once she is freed, they discover that she is from the past where the Earth and the Moon were still in-tact. However the industrious army of Ragna wants Toola in their efforts to destroy the mighty forest with a mighty weapon left behind hundreds of years ago for "the people of the past". 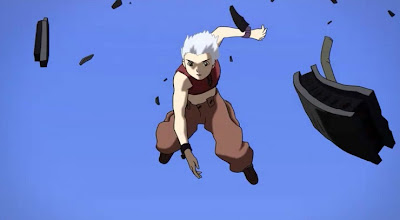 Even though the animation is beautiful, I found the story to be pretty hard to follow at times. But I did like the mystic qualities of the forest and it's fictional folklore surrounding it. I also liked the battle scenes where Agito becomes "enhanced" by the forest to counter the approaching armies. It's not the greatest anime film, but it will suffice.
Posted by Adam at 9:04 AM

anyway I'm following you now, waiting for your follow back.

thank you in advance,

i've never heard of it, but looks interesting

As a fan of Origin: Spirits Of The Past, I think you'd like Oblivion Island!

"An animated romp for the young and the young at heart! This internationally acclaimed feature film blends Japanese folklore and storybook charm reminiscent of Alice in Wonderland into an exhilarating tale sure to amaze animation fans of all ages. Sixteen-year-old Haruka is on a mission to find her mirror—a precious childhood gift from her late mother that has disappeared. On her search, she follows a strange fox-like creature to Oblivion Island, a mystical world overflowing with once-cherished items taken from their neglectful owners. Trouble follows Haruka and her new friend Teo at every turn as they contend with the island’s overbearing ruler, who will stop at nothing to use the mirror for his own sinister plan!"