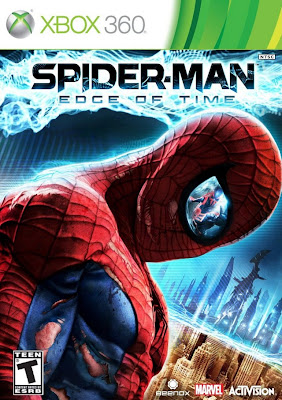 My local library recently came out with a video game section, and it grows slowly with the months. The other week I dropped off some books for my girlfriend Daisy, and decided to see if anything good was on the shelf. Mostly junk, but I did see Spider-Man: Edge of Time, and I decided to give it a spin since most of the Spider-Man games have been pretty decent.

What I like most about Edge of Time is the cinematic story set between an altered reality (caused by some evil guy in the future) of Peter Parker's, and Miguel O"Hara's (the future Spider-Man) world in 2099.  It also has some characters and plots in the later string of Marvel plot-lines. For example the most notable being is that Eddie Brock is no longer fused with the Venom symboite alien, but has become the reformed Anti-Venom. 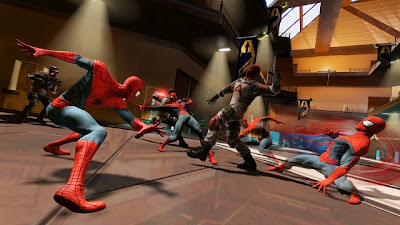 Sadly even though the story and cut-scenes are well-done and feel like an exciting comic book; the game-play itself could not say the same. You mostly go around beating up super-security guards, robots, and psuedo-zombies until the end of a stage. There's also an extreme lack of boss-fights and characters from the Marvel Universe. I got all the way to end and enjoyed it but overall it's a decent adventure but it gets about as exciting as a vanilla ice-cream cone.

Cool review. I might have to check that out, I didn't know there was a Spiderman 2099 lore.

Spiderman games seem to keep going downhill, they are okay as you say but I can take them or leave them now.