Fact of the Day: Hawaii to Indonesia 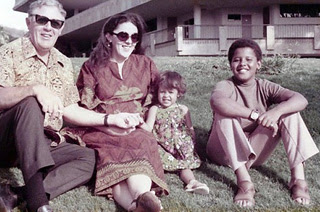 After his mother divorced his father, Barack Obama later had a stepfather. His stepdad was Lolo Soetoro who met his mother through the University of Hawaii. Soetoro eventually returned to Indonesia, and the future president spent a good bit of his childhood there as a result. Through his mother's 2nd marriage, he also has a sister, Maya Soetoro.
Posted by Adam at 12:00 AM

Email ThisBlogThis!Share to TwitterShare to FacebookShare to Pinterest
Labels: fact of the day, hawaii, Indonesia, Obama

That is quite cool.

He gets my vote.

Huh, never know that about Obama.

Is that the 2nd husband?

You never hear about his sister.

Huh, I never knew he had a sister.

no that's his mom's father. She eventually divorced her 2nd husband as well, so there's really not that many pictures of them all together.

it seems this would help with an understanding of another culture.