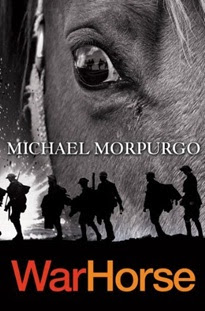 A friend of mine talk about history all the time, and he told me to go watch the 2011 film War Horse. Since I could never find the movie, he went and bought me the original book it's based on. The book is about a young man named Albert whose horse Joey is sold into the army by his father for World War I, and his attempts to find him and bring him back. I love how the novel is told from perspective of the horse, but it certainly has a anti-war feeling (which I think it is fantastic) and shows how badly mistreated horses were for the conflicts of men. The story brings back a lot of nostalgic memories since it feels like a classic I would of read in school, and I can't wait to find the movie so I can watch it.
Posted by Adam at 9:46 PM

I also meant to watch the film but they only ran it for about two weeks.:(

i never knew what the basis of this was. i heard the puppetry in the broadway version was awesome.