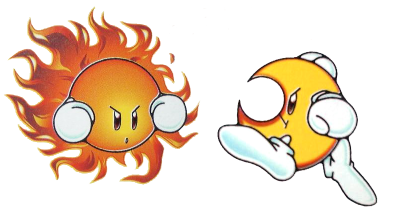 Mr. Shine and Mr. Bright are a duo boss from the Kirby series. And personally my favorites to be honest.

I guess I was really impressed by their tag-team fight in Kirby's Adventure on NES.  I would always refer to them as the sun and the moon. I liked how the light changed if they sun dropped in the back so the moon could fight.

Their other main appearance was in Kirby's Dreamland 2 on Gameboy. They fight about the same, but I also remember a move that used both characters that was something to avoid. 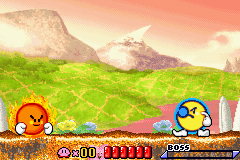 I also enjoyed seeing them comeback in Kirby's Adventure's remake Kirby: Nightmare in Dreamland on GBA. They're much bigger that time around though.
Posted by Adam at 8:26 PM

I remember kicking ass with Kirby is all the Super Smash Brothers games. These little dudes look cool, maybe they'll make it in the next SSB game.

I don't know why I never played Kirby. I remember always being excited seeing commercials for the games.

Hi! Thanks for your comments about Tyra. Everything can happen with a hunting dog. I´m glad that its not worse. Rest and medications will do it. But I will not let her hunt until I´m really sure its ok. Will check out some rehab for her. I have that on the insurance.

Man, I HATE Mr. Shine and Mr. Bright! When I rented Kirby's Adventure as a kid, it took me FOREVER to beat them! I've always disliked having to fight them in any Kirby game ever since.