Fact of the Day: Never Saw the Results 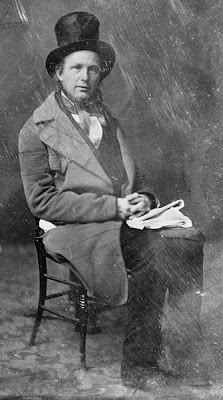 In 1872, Horace Greely ran against President Ulysses S. Grant as a Liberal Republican as he was fed up with the corruption in his cabinet. To everyone's surprise  the Democratic party (which Greely had mocked for countless years) nominated him as well in hope to defeat Grant. Shortly after the election his wife died, and Greely went mad leading to his own death. He ended up dying before the votes were counted, and if he lived then he would lost in a landslide regardless.
Posted by Adam at 12:00 AM

Oh My! Now that's a story if I ever heard one.
How awful for him.

It is nice to know that his living wouldn't of mattered in the least.

what a tragic story..

What a tragic tale.

Another fun fact: the ghetto town that smells like sewage a few miles away from us is actually named after him (Greeley, Colorado).

What an interesting fact. Not something I knew about Grant's opponent. But then again, that's why you don't usually hear or remember anything about the guy who loses.

just as well then!

Fun fact, indeed. I was just wondering today what the protocol was in the event one president didn't survive to the inauguration. This doesn't really address that as it wasn't relevant, but I'd be interested to see an instance where it did, or just if there was any law on the books for such a continuum. Politics are an interesting thing, to say the least.

you have to remember, back then the Republicans were on the left and the Democrats were on the right. Big political shifts over a century created an almost full-reversal.

I'm not a 100% sure, but I think the running mate would nab the office.