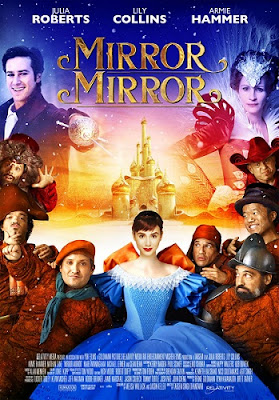 While Snow White is such a classic fairy tale, there have been very little movies or cartoons based on the story in the last few decades that I could name off memory. Ironically 2012 saw two very different Snow White films, the first being the light-hearted Mirror Mirror and the grim Snow White and the Huntsman. During previews I initially favored Mirror Mirror, but due to mix critical reviews I didn't see until many months later. 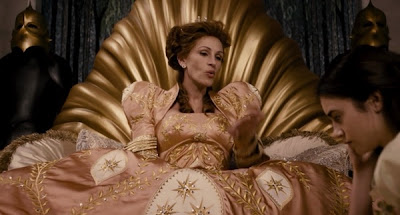 The story is not an exact carbon copy of the classic fairy tale, as Mirror Mirror added its own twists and new characters. But the story is generally the same at first. The Evil Queen has taken over the kingdom after the death of Snow White's father The King. After Snow White's 18th birthday, she eventually enrages the Evil Queen and is forced to live in the dangerous wilderness. 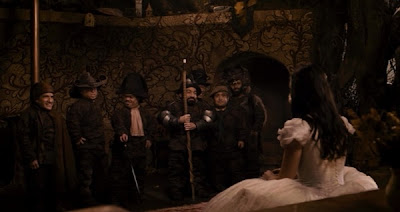 She is saved by a bandit crew of Seven Dwarfs during her first night in the forest. They later team up because of their mutual hatred for the Evil Queen and a rapidly growing friendship. Snow White then tries to save the traveling foreign prince who the Evil Queen attempts to bewitch and marry. 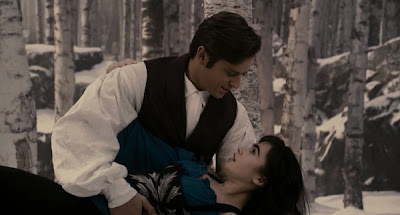 I ended up liking Mirror Mirror much more than my worries projected. I love the classic fairy tale era and characters. I thought the performers for Snow White, the Prince, and the Evil Queen all played adequate parts but I loved Nathan Lane as the Evil Queen's right-hand man Brighton. While the film itself is up to par, but it's probably not going to be one of the iconic versions that will become synonymous with the story itself decades from now. But it's still a decent movie all-ages could enjoy and I'm glad I didn't skip over it.
Posted by Adam at 3:30 PM

I will now take a look. I had heard of the huntsman, and I didn't like it. I hope I like this one as much as you did.

I saw this when it came out in theaters! It was a fun movie. It's not epic, but it was pretty good. I loved the fighting scene between the prince and princess ;)

thank you for your sweet comment on my blog <3

it was really cute. i giggled through the whole thing. i like how snow white saves herself, and the evil queen doesn't die. it was a refreshing & fun role for julia roberts. :)

I heard it was good too, and now from you, will have to give it a go.

Thanks for the review! I may pick it up for my daughter :)

I can't imagine anything Julia Roberts does being watched decades from now.

Meh. I didn't like the film. Good review though.

Tarsem always delivers, but I do agree with negative comments on Julia Roberts, she is always bad...