Fact of the Day: Father Frost 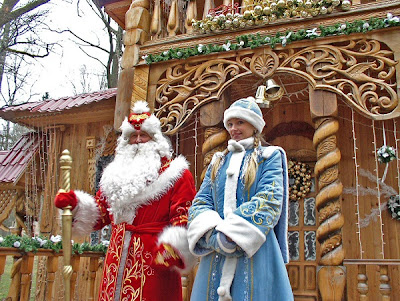 Ded Moroz (translated as Father Frost) is the Santa Claus in the culture of most of Eastern Europe. However the earliest tales of Father Frost depict him as an evil wizard who would freeze people and parents would give him presents to get their children back. However he reformed his wicked ways and now is a good person. His (usual) helper is his beautiful granddaughter Snegurochka whose name translates as Snow Maiden or Snowflake Girl.
Posted by Adam at 12:00 AM

That is such an interesting tidbit about christmas!

It sounds like he a bad 'un. I wouldn't give him my presents.

Well, at least he changed his ways and became one of the good guys.

My mother was Russian and she told me this story. Gorgeous picture!

we call him Deda Mraz in Serbian :)

I am learning a lot with your posts!!! Very interesting this "character" kisses:)

I think you know more than Sheldon does on The Big Bang Theory.

I'm Russian and that's what we call them there. Ded Moroz and Snegurachka. I'm wondering why they call it Santa Clause in America. You should post some details about it:P

When we were in Russia, we loved the fathwer frost statues.