Fact of the Day: Mortal Monarch 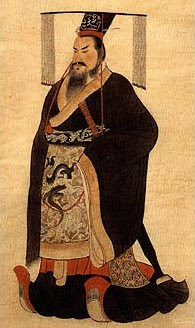 Qin Shi Huang became the first Emperor of China by defeating several states and unifying China. His impressive accomplishment made history, and Huang wanted to hold on to that glory forever. He was obsessed in trying to find a path that would make him immortal. He ironically died from poisoning after he took some mercury tablets that promised him eternal life.
Posted by Adam at 12:05 AM

Email ThisBlogThis!Share to TwitterShare to FacebookShare to Pinterest
Labels: china, fact of the day

Yep... Never understood why the Chinese though mercury was so amazing... ._.

ohh, poor...why everybody wants to live forever? It must be so boring.Life is exciting because you don´t know when is your last breath.Kisses:)

Nice post! I love to read interesting facts about China's things)
I wish Happy New Year to you!

If only Huang had lived in current times (and of course not been a tyrant), he could have gone to the ER or urgent care center when he ingested the mercury.

if only he wasn't so full of himself. immortality is NOT reality. can i call him dough head?