Fact of the Day: Rudolph Has Terrible Memory 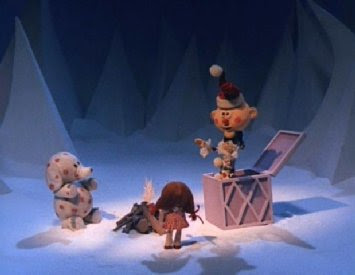 In the original airing of the the 1964 TV Special Rudolph the Red-Nosed Reindeer, there was no finale involving the rescue of the misfit toys. Viewers complained that Rudolph broke his promise, and a new scene was created to fix this. Looking back, they poke fun at this as the scene depicts a very pessimistic group who think Rudolph and Santa aren't coming.
Posted by Adam at 12:00 AM

Email ThisBlogThis!Share to TwitterShare to FacebookShare to Pinterest
Labels: christmas, fact of the day, Rudolph The Red-Nose Reindeer

I wasn't even a blood that time haha

Depending on what month this aired in 1964, I may not even have been conceived yet, so I don't remember it...haha... But very interesting! I didn't know this.

Yeah not even alive, but I'm sure they would survive.

Interesting fact! I was around but too little to remember this!

I'm happy to be able to say (finally!) that I hadn't been born at the time of the original airing. LOL

Interesting fact—I'll have to tell my kids someday.