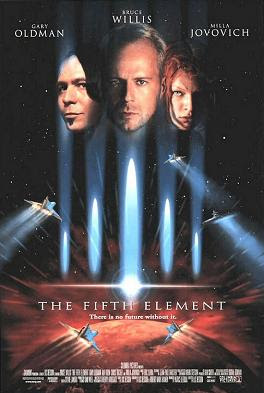 The movie is set in the 23rd century where Earthlings have found their way through space and colonized parts of it. But one day Earth's military encounters "The Great Evil" which is something like a dark sun that cannot be destroyed. 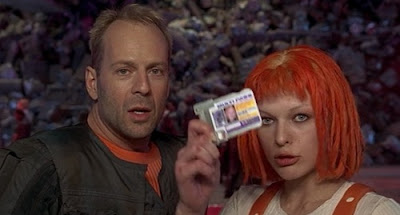 Earth's only hope is for a weapon formed by the "five elements". Four of which are special stones, while the fifth is Leeloo who is a strange humanoid woman who happens to be the supreme being. She is revived by scientists and she runs out of the facility scared. She lands in the cab of a taxi driver named Korben Dallas who saves her. Now the duo must work together to defeat the threat to Earth with an evil tyrant and a warrior race of aliens trying to stop them.

Coming into the film, I had no idea what to expect. But I just love how goofy and serious the movie takes itself at the same time. This strange sci-fi film is inventive, imaginative, and just plain amazing. Bruce Willis, Milla Jovovich, Gary Oldman, and Chris Tucker play splendid roles which make this one film you shouldn't overlook.
Posted by Adam at 8:00 PM

I haven't watched this in years but it's good!

this was my first introduction to milla jovavich and I've been a fan ever since
great movie, I particularly loved that techno opera bit
and gary oldman... oh yes
just so much to love about this movie

i want to watch this merely because of mila