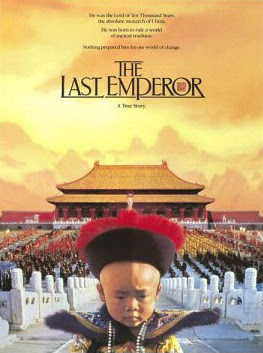 One of my personal goals is to watch most of the modern Oscar picks for best picture. I saw The Last Emperor on Netflix Instant, and I was debating in my head whether I should watch it or not since there are often many biography films based on the same subject. Then I found out this film won the award for best picture in 1987 and that was enough excuse for me. 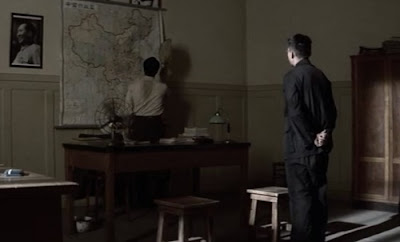 The film is about Puyi, the last official Emperor of China. The film starts out with Puyi in imprisonment by the People's Republic of China in the 1950's. Most of the facility are accused traitors who helped Japan massacre China during World War II. Each inmate writes a confession with a life story to be judged by the government officials.

Puyi then has many flash-backs starting with his childhood where he was crowned Emperor when he was just a toddler. Then his stay in the Forbidden City as Emperor but soon learns that he can never leave the palace as his rule no longer extends outside the city. Then you see depictions of his life later on after his exile in the Republic of China, and his role as the puppet ruler of the Japanese-ruled Manchukuo state in northern China.

While it contains some minor historical inaccuracies (I knew a good bit about Puyi before the film) I did really enjoy watching the biopic. It doesn't shed Puyi in a positive light as you'll feel angry during his Imperial rule and pity for his fate after he leaves his palace. I thought Peter O'Toole, Joan Chen, and John Lone played fantastic roles, and I can see why this film nabbed the Oscar for Best Picture.
Posted by Adam at 3:30 PM

Seen this one a while ago, it was pretty good.

I am way behind on movies, too. Great goal to watch a bunch of the best picture films.

i think i thought this looked boring, but i know all too often, i can be wrong.

Good blog... keep-up the good work... May I share a blog about Beijing, at Forbidden City in https://stenote.blogspot.com/2018/10/beijing-at-forbidden-city.html
Watch also the video in youtube https://youtu.be/mFRbH9breNk