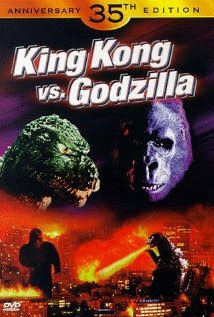 When I was a kid, I was really fascinated by Godzilla. I remember seeing this title at Blockbuster, and I begged my mom for us to rent it. This was probably the first "versus film" I've ever seen, and I hated it. 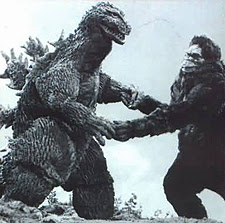 I suppose it was a good idea to bring two classic movie monsters in an epic battle. Though it's interesting to note that both Godzilla and King Kong died in their original films. So shouldn't this film be called Zombie vs. Zombie? 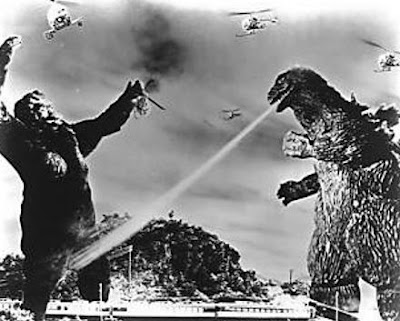 I don't remember all the details of the movie, but the main reason I hated it was the ending. It ends in the ocean, and King Kong is the only one emerging from the water. Godzilla is presumed to have survived making it a "draw". But it made it look like King Kong had the upper hand, and I was always certain that Godzilla would take down the giant beast in five minutes.
Posted by Adam at 7:00 AM

Like Alien vs Predator - which I thoroughly enjoyed btw but it was totally biased towards the Predator and nothing about Alien(s) was redeeming! LOL! take care
x

I can imagine that the special effects in 1962 were not that good.

It may have been cheesy, but it was MUCH better than Godzilla vs. Barney.

Just from the cover alone I'd avoid that.

What are you thoughts on the upcoming Godzilla? I think it comes out in 2013

Me too! Kisses, Lucy www.tpinkcarpet.com

You're not the only one who hates that movie. I also hate it. In fact, it's my least favorite Godzilla movie because Kong wins against the Big G in the end. Therefore, I want Godzilla to win against King Kong because I like reptiles more than mammals. Besides, I hate mammals winning against reptiles.

I really could, I'd make to Kong movies that show you-know-what-gorilla getting killed by animals that he defeated.