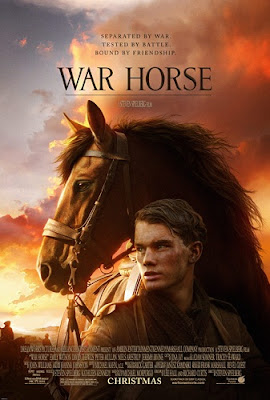 A friend of mine was once a owner of many horses, and he suggested I watch the film War Horse. Though he did get me a copy of the original book that the film is based on first. While it took me some time to get the movie, I can't believe I waited this long. I loved the book, and Steven Spielberg did an amazing job with it. 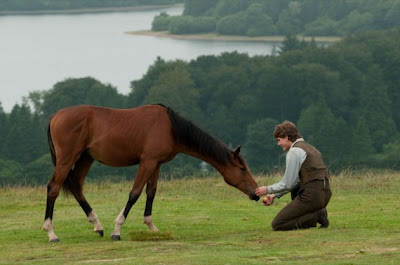 The film starts out in a peaceful early 20th century England. An old man named Ted Narracott favors a horse in an auction, and loses his head when another fellow also wants the horse. He ends up destroying his budget, and the horse Joey must plow the whole farm to prove his worth with the help of Ted's son Albert. 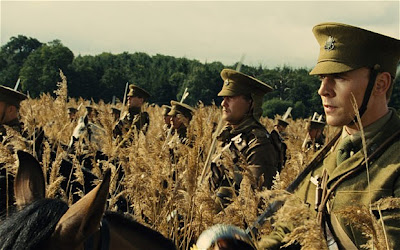 Albert trains Joey well, and they end up saving the farm. However his father is compelled to sell Joey to the British Army as World War I has just broken out in Europe. Captain Nicholls pities Albert after see him beg for his beloved horse back. Nicholls promises that if he and Joey are both safe and sound, then he'll return the young colt back to his care when the war is over. 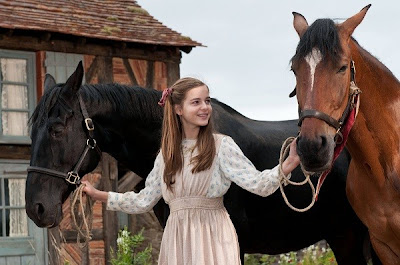 However tragedy strikes in the battlefield as Joey loses his caring Captain early on. He then is acquired by whoever finds him. For most of his war career he ironically pulls weaponry and machines for the German army. But my favorite part of the story is when he ends up in the peaceful French farm run by Emilie and her grandfather. 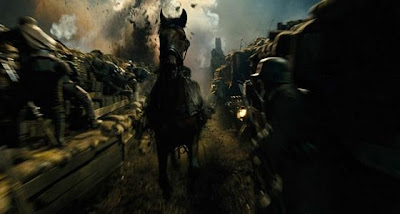 Joey's tale of service in World War I may be at times unrealistic, but also with plenty of heart-warming and heart-breaking moments. It also shows the brutal nature of war, and complete lack of concern by most humans (except most of Joey's carekeepers) for animals. It has a few flaws I admit, but like most of Spielberg's work it's just a fantastic film.
Posted by Adam at 5:34 PM

Still haven't watched this one, may get to it, sounds okay, not a one I'll run out to watch.

really? your the first person i've heard that's seen it. i wondered. is it visually artistic? so adam did you prefer the book or movie? or were they uniquely different in their own right? how many questions are in this comment? ;)

I so wanted to see this movie but I'm sure I would need an entire box of Kleenex in order to watch it.

My 10 year old wanted to watch it, but I wasn't sure if it was his type of story. And I'm with Just Keepin It Real. I know I would never make it through the movie without finishing a box of kleenex.

a nice movie for those who love horses :)

Latest: Bid goodbye to 2012 with Fireworks!

Will definitely look out for this movie.

It's visually appealing, I don't know if you could say artistic. There's things about the book I liked more like how Joey tells the story in the book (in the movie that would of been wierd), things are a bit more realistic, but I felt the movie had the action better and the final scene where the grandpa makes a suprise action

yeah you're probably right. I usually can keep a stone face, but I got a little teary-eyed during some parts.

I saw the stage play which is just winding down in Toronto and it is amazing!