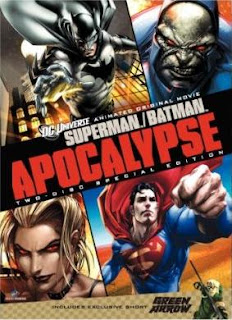 I've been watching a lot of DC comics films lately, but I was a little hesistant to watch Superman/Batman Apocalypse. I thought at first that this was some kind of doomsday story involving Batman and Superman but that's not the case. 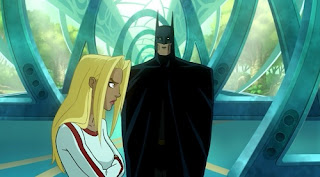 The story is more about a young woman who crashes down to Earth and causes havoc out of panic.  Batman takes her down, and they find out that she's Kara Zor-El from the planet Krypton. She also happens to be Superman's cousin, and his only known relative still alive. 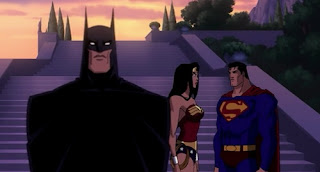 Batman isn't as excited to see Kara as Superman is. He insists she goes through the proper training to gain control over her powers and emotions. She trains with Wonder Woman's allies on their island. During her training, a dark army appears at its shores. After victory is won, it's discovered that Kara is missing and it's up to the super-friends to find her. 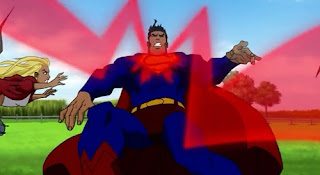 Despite the excellent animation, I ended up not liking Apocalypse as much as I wanted to. It's a decent film but the action and story is too spread out among the characters. Near the end, Batman and Wonder Woman have nothing to do. Superman and Batman fans may enjoy it, but it's not going to win over anyone else.
Posted by Adam at 6:00 PM

Yeah it wasn't my favorite either, okay for a watch but that is about it.

Good for variety I suppose

still looks interesting for me...
(I'm a fan of both Superman and Batman)

I think its worth tobe watched. Ill go check out on this

Have a good Sunday!
Elle
www.redischic.blogspot.com

I always like batman and not so much on superman..:)

Superheroes don't mix. Even when it looks good.

Those comics have sure changed from my day. I think I still have some of them.