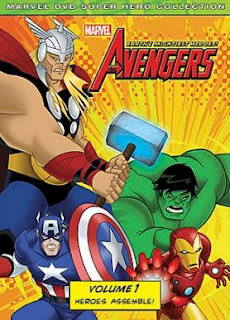 When I got sick with the flu, I had a lot of time on my hands. I decided to check out The Avengers: Earth's Mightiest Heroes on Netflix Instant, and managed to finish the first season in about a week. I loved the major motion picture last year, but the cartoon is less stellar. 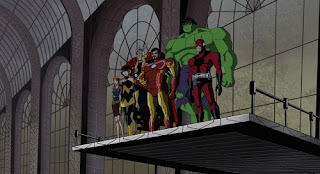 It may be a bit more true to the original story though. It includes Wasp (who named the team) and Ant-Man who were founding members, but were cut from the cast of the 2012 movie. They're pretty weak superheroes, so that's probably the reason. I hear they're trying to make an Ant-Man movie now, and I can't help to think that'll will probably be a failure. 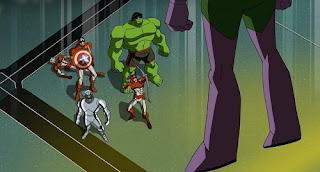 Well anyways after a few introductory episodes, The Avengers assemble and take on many Marvel villains. From the evil army Hydra, the enchantress Amora, the evil conquerer Kang, and Thor's renegade adoptive brother Loki. 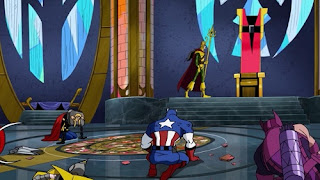 The problem is that for 26 short episodes, there's just too much action, characters, and villains to keep up with. Nothing serious ever happens, and characters never have a chance to evolve. It's a good show I admit, but by the end of season one it was starting to get a bit dull. I'm still debating whether I should watch the second season or not.
Posted by Adam at 8:23 PM

I NetFlix-it when I am sick too. So much stuff to watch.

The second season is way better, none of that origin crap, even though their is still a ton going on and they got cancelled so the last episode was kind of rushed, but they brought in tons of other heroes so it was fun.

we all love heroes!

What a coincidence, I just got Netflix! :) Will definitely check it out and entertain my inner child.

I liked the movie avengers.
www.thoughtsofpaps.com

I so love them better than justice league

What episode is the picture that has Kang and Ultron from?