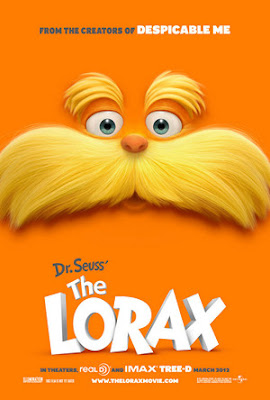 As a child I loved reading every book I could from Dr. Seuss. While the animated TV specials were good, the two other major movies (I never saw Horton Hears a Who) based on Dr. Seuss work were hard to guess. I really liked The Grinch but the movie based on Cat in the Hat was beyond horrible. But I still wanted to give The Lorax a try. 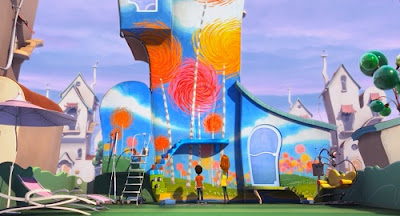 The movie expands upon the plot of the book by giving more details about the young boy who is named Ted in the film. His crush Audrey tells him about trees and how they're aren't any more around. He decides to go find a tree to give to her as a present. But as he goes outside of town, he comes across the house of the Once-ler. 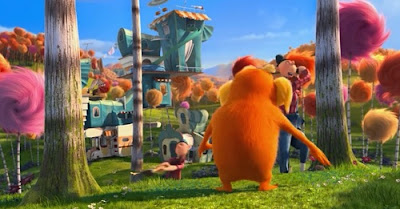 He tells Ted that as a young man he had come across a beautiful forest. He then started chopping down trees to make a new invention, but his destruction prompted the appearance of the Lorax. The creature who speaks for the trees who fails to convince the Once-ler to stop destroying the forest. The Once-ler then begs Ted to plant the last tree seed to hopefully undo the damage he caused. 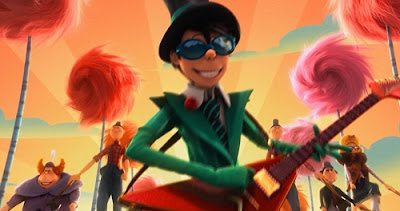 I honestly think they did a decent job at making a movie based on The Lorax. I'm a bit sad they never use the classic dialogue featured in the book except the excellent quote "Unless someone like you cares a whole awful lot, nothing is going to get better. It's not.". I also liked how they kept the original message about the dangers of destroying nature for greed. The expanded plot works and I did enjoy the musical numbers. Kids will love it and Dr. Seuss fans should enjoy it as well.
Posted by Adam at 1:00 PM

In the early 1950s, when i was very young, I loved Dr. Seus. I believe there where only a few available at the town library in those days, but I loved Horton hears a Who and Barholamew(?) Cuubbins. I guess a good children's book easily spans generations. This post brought back memories!

I haven't read the book but I love the movie. I even wrote a blog post about it. This is a movie that every kid should watch. I highly recommend this movie. I also like the musical numbers.

it does have the most amazing colours!

Great and interesting post. I like it.
I also invite you to my blog. ;)
Yours. Have a nice day.

I think this was one of the Dr. Seuss books I didn't read because I really can't recall it like I can The Grinch that Stole Christmas or the Cat & the Hat. Still, I think I'd rather check this film out over the CG Cat & the Hat film, which I've heard so many negative things
about.

Thanks for the review, I will have to watch this! I love Dr. Seuss!

Thanks for a good, useful review!

i haven't watched that but i'll consider

On my Netflix instant queue :)

my friend saw this with her kids and she thought it was cute too.