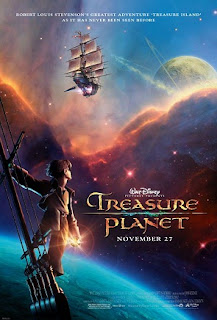 I remember when Treasure Planet came out in 2002, but I didn't even come close to going to see it. I think my brother might of seen it, but I'm not surprised to learn that it flopped at the box office. I thought the art style was rather atrocious, and I bet others did too. I guess it wasn't that bad, but I wanted to give the whole film a chance now even if it's 11 years later. 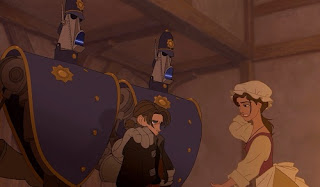 The film is about a young man named Jim Hawkins who's gone past many bumps down the road of life after his father left him and his mother. The family lives in a futuristic galaxy with a sea-like culture. One day a ship crashes at the foot of their inn and the pilot is injured. Before he dies, he gives Jim a map to Treasure Planet. 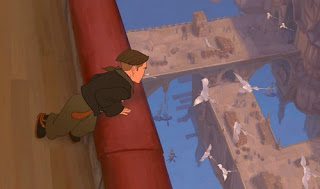 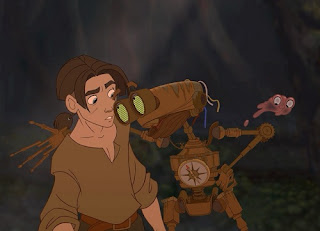 I never read the book Treasure Island in which the movie is based on so I can't compare the two. But I really enjoyed Treasure Planet way more than I expected. It's not Disney's best work, but I regret that I missed out for so many years. Treasure Planet may not be gold, but it's a good silver.
Posted by Adam at 5:00 PM

Yeah agree, wasn't a top one, but it was good.

I've seen this movie but haven't really watched it

It looks really interesting. I'll have to check it out. I just added it to my instant queue on Netflix. I don't think I remember seeing much of anything for this movie advert-wise.